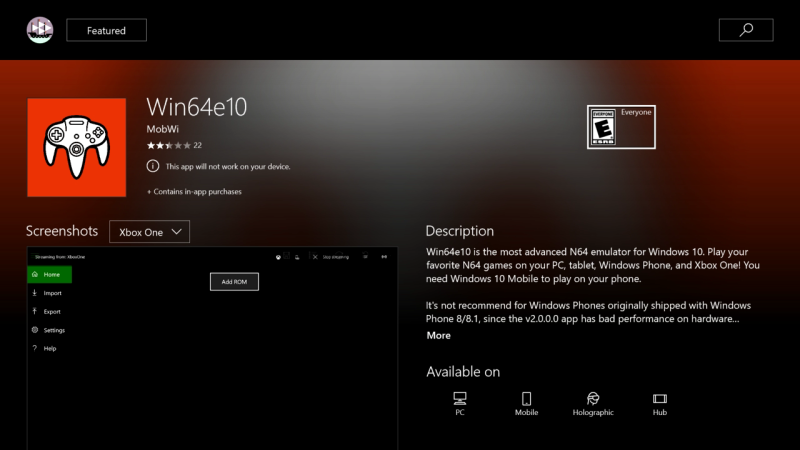 Just yesterday we told you that Win64e10, a Nintendo 64 emulator prepared for Microsoft platforms and therefore for Xbox One, came to the Redmond company’s console for the modest price of 9.99 euros. Less than 24 hours after its world premiere, the emulator has been retired, although it can continue to be downloaded for other systems.

The Xbox One August update allowed machine users to download any Xbox-compatible Windows application, including emulators of this nature. However, Win64e10, which had been advertised under the premise of allowing titles such as Super Mario 64 or Star Fox 64 to be played for less than ten dollars, has not passed Microsoft’s filters.

Emulators are not illegal, although distributing ROMs without authorization violates United States copyright law, so Microsoft has decided not to gamble with these types of applications. In this sense, a few weeks ago the American company withdrew an NES emulator, so it does not seem to be very interested in allowing this kind of services on Xbox One.

Microsoft Flight Simulator – From Szombathely to Los Angeles, all airports in the world will be included

ASUS is teasing a new ROG Phone via the Weibo social network in China, which…