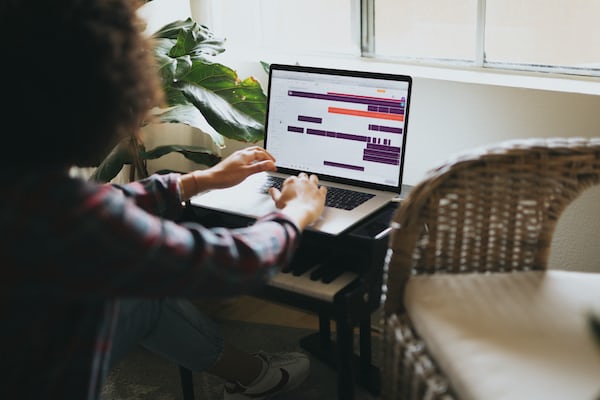 K.unless he knows what an Apple Watch is. It is a small device that can be classified as a natural extension and complement of the iPhone. I had been preparing to buy it for several years, and I had the same with AirPods – I promised myself that I would buy them one day, because I knew that it would be a good purchase in my case.

The time has finally come that the Apple Watch has made friends with my wrist. I invite you to review the Apple Watch Series 6, the latest Apple smartwatch, which premiered in September 2020.

I think it doesn’t make sense to describe all the features that Apple Watch offers. In fact, the sixth version is only an improved version of the Apple Watch 4 and 5. On our website you can find a full review of the previous versions – Apple Wacth Series 4 and Apple Watch Series 5.

No revolution – this is another evolution

Many people on the web said after the premiere of the Apple Watch Series 6 that it is a reheated cutlet of the project from two years ago. It cannot be denied that this is not the case, in the end we get practically the same design. There is, however, the other side of the coin – the design may not appeal to everyone (especially when we have not had contact with it live), but the watch makes a really positive impression in practice. Despite the fact that two years have passed since the premiere of the first Apple Watch, which was made with a new design trend, it is still one of the most beautiful smartwatches on the market.

Two new colors to choose from in the aluminum version

The evolution of the smart watch from Apple has brought two new colors to choose from – blue and product red. As I stated after the first renderings and graphics on the Internet, the red color does not look very good, it looks phenomenal live. Strong red catches the eye and finally introduces some warm colors to the world of Apple Watch.

The same cannot be said about the strap itself, which, unlike deep red, is simply raspberry and resembles the shade of “red” that is offered in the case of iPhones 12. It may not be the worst in the long run, but the color is quite, writing humorously – “not very masculine”. The red Apple Watch looks much better with the braided Solo band, which is also new to Apple this year. In this case, it can be said that only here we can say that it is a truly red strap, not a raspberry one, as in the case of the silicone counterpart, which is included as standard with the watch.

The band, which costs 450 zlotys, is soft to the touch, and with its help, we can completely forget that we have something on our wrist. It is extremely delicate, and at the same time it presses all sensors well against our skin, which allows us to take measurements well with our smartwatch.

Before buying, however, it is worth measuring our wrist several times with the template, which is available on the Apple website, to correctly choose the size of the strap for our needs, because otherwise we will have to send and replace the band via the Apple website.

Pulse oximeter, or colloquially known as the “coronavirus test”

The biggest novelty in the sixth version of the smartwatch from Apple is the pulse oximeter. With the addition of a new sensor, the element that distinguishes the sixth version from its predecessors are the sensors located on the bottom of the watch. Pulse oximeter testing is nothing more than an analysis of the oxygen in our blood. Through the sensor, the smartwatch is able to show us the percentage of hemoglobin in red pigs carrying oxygen. Humorously, the addition of a sensor that measures blood oxygenation is Apple’s response to the pandemic.

Blood oxygen levels should range from 95% to 100%, if the results are lower, we can start to worry – remembering that the Apple Watch is just a gadget, not a medical device. We can perform a fifteen-second test on our own through a dedicated application, or set the test to be performed automatically at certain moments.

For example, if we have been sitting for a long time (even while writing this review), the watch will automatically perform an analysis, if the result is above the norm, we will be informed about it, otherwise we will see the result in the history of tests in the “Blood oxygen” application. Automatic pulse oximeter tests are also performed at night when we use the “Sleep” function that appeared with watchOS 7.

Apple Watch Series 6 is my first Apple Watch, and also a smartwatch that I have been using on a daily basis for a long time. It was the always on display mode that convinced me to choose the sixth version, instead of the cheaper equivalent of the Apple Watch SE. Why? After all, many people may say that this is just an unnecessary friction, because all you need to do is turn your wrist for the screen to wake up and light up. Yes, but in my opinion, every time you turn off the screen and leave only the black surface of the screen, it distorts the aesthetics and spoils the “wow” effect of the constantly exposed dial, indicating the time and other information.

However, I do not have a comparison whether the screen is actually still on, it is brighter compared to the Series 5, but comparisons on the Internet show that in fact, always on display copes better in the sixth generation – especially in strong sun.

Before buying a watch from Apple, I was prepared for the fact that it is a device that will need to be recharged every day. The company from Cupertino put all the cards on high performance, a lot of possibilities and functions, also this meant that the battery is not the best element in the whole, which is the ready Apple Watch.

After all, the mounted link inside the watch surprised me very positively. In my case, Apple Watch lasts about 1.5-2 days with the always on display function turned on, which in my opinion is a very good result. If it weren’t for the fact that I go to bed every day with my watch on as a wake-up call, I wouldn’t have to have to charge it every day.

The pace at which the battery percentages jump on our smartwatch should also be highly praised – a few minutes on the charger automatically adds tens of percent that will allow us to use the watch for several hours. In the end, throughout the entire period of using Apple Watch, I have not had a single situation in which the watch would turn itself off due to lack of energy.

How does Apple Watch Series 6 perform every day?

Like I said in the introduction – Apple Watch Series 6 is my first smart watch from Apple. This is the last piece of equipment that completes my small collection of bitten apple appliances. In Apple devices, I value the focus on the integration of many devices, which together form one unity.

At first, however, it seemed to me that the Apple Watch would be just an unnecessary gadget for me, but in the subconscious I felt that I would be happy with it anyway. It also happened, I did not think that any smartwatch would be able to fully satisfy me. The equipment only takes off when I have to put it on the charger. It’s just a useful gadget that doesn’t give the impression that we’ve thrown money down the drain.

Full integration with the entire family of Apple devices, an unquestionably refined operating system that does not disappoint with its intuitiveness, as well as many flavors that can only be found in an Apple watch make the Apple Watch Series 6 undoubtedly my best purchase of 2020.